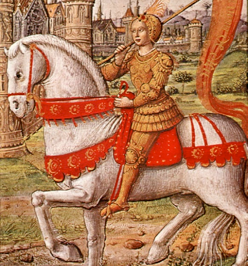 Book 1 in the Chronicles of Silence series!

The 13th century was the time when legends of King Arthur and the Knights of the Round Table flourished. Whether Arthur was a real man or only a grand legend remains debated to this day, but real or mythical, the stories of Camelot’s noble knights stirred the imaginations of men in the Middle Ages. Characters like Sir Gawain, Sir Lancelot and Merlin the Magician still shape our images of honor, chivalry and heroism.

So powerful and enduring are these legends even today, nearly 1,000 years after the publishing of the first popular King Arthur book, tens of thousands of visitors come to Glastonbury Abbey in England (pictured at right) to visit the legendary graves of Arthur and Guenevere, and hike to the nearby Tor.

But among the legends of the Knights of the Round Table, women seem destined to sit passively on the sidelines. While King Arthur’s knights went adventuring, the ladies of Camelot apparently did nothing but wait demurely for their champions to return from quest or tournament – until recently.

Not long ago, on the musty shelves of a British university, a manuscript was discovered in a forgotten box labeled “worthless papers.” It was titled Le Roman de Silence. On its pages was a story that had been lost for 800 years – a story of one of the greatest knights of the Age of King Arthur. A story of a knight who was a woman!

The saga of Camelot’s lady knight has been silent too long. The Chronicles of Silence are based on this legend. This story will now resume its place among the great tales of adventure and heroism. Silence redefines what it means to be “a knight in shining armor.”

Look for the The Champion in Silence, the first book in The Chronicles of Silence series, coming soon from author Scott Farrell.