The Fall of a Slayer – Scott Farrell, Author 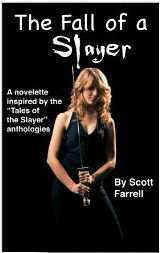 An Original Novella Inspired By The “Tales Of The Slayer” Anthologies, Based On “Buffy The Vampire Slayer” Created By Joss Whedon

Into every generation a slayer is born …

This is the story of Kayla the Vampire Slayer and her battle with a notorious vampire named John Chilling, who earned his reputation for cruelty in the Indian Wars of the Old West. With the help of her watcher, Jyoti, Kayla sets a deadly trap – and then must confront the slayer’s greatest sacrifice. (Inspired by Joss Whedon’s hit TV series “Buffy The Vampire Slayer” and the “Tales of the Slayer” short story anthologies.)

Kayla Robbins thought she was just a normal girl living a normal life in Tucson, Arizona. But all of that changed one day when a strange mail delivery set her on a path to destiny — the path of the girl born to fight the forces of evil as the slayer. Guided by her watcher, Jyoti, Kayla’s job is to stop one of the most notorious monsters ever to rise from the grave: Col. John Chilling, a heinous war criminal of the Western Frontier, who had a taste for murder and torture even before he was turned into a vampire, and whose horrific legend has now been written in a century of innocent blood.

To put a halt to Chilling’s rampage, Kayla and Jyoti set a deadly trap. But when the ensuing battle leaves Kayla wounded and crippled, she must reconsider everything Jyoti has taught her about courage and sacrifice as she seeks a way to continue the fight — and to confront the essence of what it means to be a warrior.