Nicholas’s boots rested by the hearth, ice melting on their toes. The saint himself sat nearby at the table, his belt unbuckled, his long fur robe falling open at his waist. He reached forward and raised a steaming mug of cider in the direction of the opposite chair. 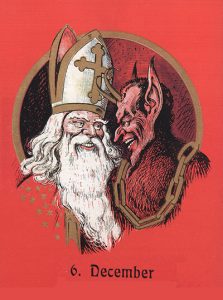 The Krampus accompanies Saint Nicholas on his rounds from house to house in regions of Germany and Austria. Dec. 6 is Saint Nicholas’s Day, which makes Dec. 5 the Night of the Krampus. (Image provided by Wikimedia.)

A grin appeared in the shadows at the far side of the table.

“Ja,” Nicholas said. “Just one more delivery I have to take care of.”

Krampus’s forked tongue darted out, licking sweet liquid from the rim of his cup. “And what is that?” he asked.

“It’s our custom to share a meal when our duties are done on Christmas Eve,” Nicholas said. “But as I was filling my bag yesterday, I realized someone’s been overlooked.”

“What’s this?” the Krampus wondered. “I thought your gifts were only for good boys and girls.”

Nicholas nodded, saying, “True, and so you are, old friend. My ‘naughty’ list is for people who tell lies and think only of themselves. Who never bother to do anything to help anybody else. What you do may be harsh, Mr. Krampus, but when you come to think of it, there’s nothing dishonest about you. You’ve never so much as raised a switch or pointed a claw at anyone who didn’t completely deserve it.” He gave a merry chuckle. “And, by gosh, your discipline has set many a mischievous youngster on the path to becoming a respectable adult. And that qualifies you as good in my estimation, you see?”

With his taloned hands, Krampus made short work of the wrapping. From the box he drew out a pair of thick, warm mittens. “Danke, friend,” he said. “They’ll keep me snug, even on the coldest nights.”

“Glad you like them,” Nicholas said. “And now our work is done at last. Let’s tuck into our dinner. Everything looks delicious.”

“Ah,” the Krampus said. “About that … funny thing, I, too, realized I’ve disregarded someone. On this night each year I bring punishment and woe to the wicked: Those who take undue credit, make promises they don’t intend to keep, and weaken the world’s moral fabric.”

Nicholas’s snowy eyebrows bunched together. “What are you talking about?” he asked.

“Have any of those elves who toil in your workshop ever tasted a crumb of gingerbread or a drop of cocoa left for you by the grateful, cheery children on your route, eh?” Krampus wondered. “How many ghettos and tenements have you gone dashing by on Christmas Eve, tossing out one disappointing, token gift, socks or a second-hand doll, as you’re rushing off to heap stacks of expensive toys beneath the tree of some wealthy family — if you bother to stop at all?” He clicked his long claws on the tabletop. “And how many innocent-hearted toddlers have been corrupted by your jolly message, that virtuous acts should be motivated only by material gain?”

Nicholas laughed in disbelief. “But the joy and smiles! Visions of sugarplums! What about all of that?”

“Those who refuse to see the evil they do,” Krampus said, “those are the worst of all.” He reached into the hamper at his side and removed a stout birch branch. “Luckily, we have a little time left before dawn. Just one last thing I’ve left to deliver.”

Author’s Note: This short-short was written just after the first Krampusnacht: Twelve Nights Of Krampus anthology was published in 2014. I’d had so much fun working on my piece for that book, “A Krampus Carol,” that I just couldn’t resist spending a bit more time with the character. Although, in this story, the Krampus is a bit more articulate and thoughtful regarding his role, as well as that of his more famous counterpart. I hope you enjoy spending a bit more time with the two of them as well. Treu dem guten alten Brach!

Gruss vom Krampus! For more Krampus-y goodness, get your own copy of Krampusnacht: Twelve Nights of Krampus, available from Amazon in print or Kindle format.